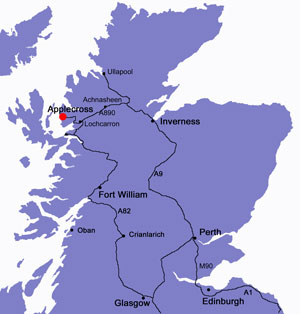 Applecross is situated in the North West of Scotland, it is about a 6 hour journey by car from Edinburgh or Glasgow.

From Edinburgh follow the signs for the A90 Forth Road Bridge and after crossing the bridge follow the M90 to Perth and then the A9 to Inverness.

From Glasgow take the M80 to Stirling and then the M9 and A9 to Perth before following the A9 North to Inverness.

The cottage benefits from a private parking place directly outside the house. There is access to the Lonbain beach (shingle) and adjacent coastal walks. All around are the ruins of a bygone age including the ruins of the Lonbain street which was featured in the film about St Kilda "Ill Fares The Land". Also nearby is the old thatched croft "Duncans House" one of the last cottages of its type in the area and in use until quite recently.